Mail from Rovaniemi, Vol.2
More About The Pleasures of Everyday Life and a Lifetime of Happiness 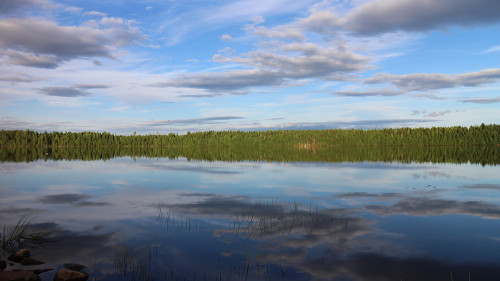 9:11 PM on June 14. In early May the ice on the Kemi River breaks up and disappears. With summer approaching, there will be no such thing as darkness at night.

And Then One Day, the Turtle Overtook the Rabbit

Why doesn’t everybody try harder, I remember asking myself in a fit of pique one day back in 2001, when I had been in Finland for just a few years as a foreign student in the engineering design department at University of Lapland. At Kyoto City University of Arts, there were students who weren’t that highly motivated, too, or course, but lots of students stayed into the night working on their homework or engrossed in their own projects. Both on and off campus there were art galleries, and students would do projects just to get shown. One time deeply committed students from sculpture and environmental design broke down the barriers between departments to create a solar car.

Regardless of age or major, I think it is the chance to create something you can call your own that is the most enticing thing about getting involved in creating something physical. The burning desire to do that kind of fun thing is what I associate with art students. Just to make something a little interesting they will keep at it regardless of whether it’s late at night or a day off. They’ll keep on working, skipping meals and skimping on sleep.

But Finnish students go straight home soon after classes are over. Only the foreign students are on campus at night and on holidays. The Finnish students take it easy to the point where one is tempted to ask whether the quality of their work is really up to snuff. Couldn’t they work harder? When professors in Finland critique students’ work, what really surprised me was how little the professors come down hard on the students and urge them to step it up.

Yet in the end the Finnish students get an undergraduate degree in three years and a master’s in five, and in that time they grow to the point where there is no difference between the level of their work and that produced by their Japanese peers. For starters, the competition to get into university in Finland is nowhere near as intense as the Japanese entrance examination system. The level of Finnish students’ work may be lower at the beginning, when their basic abilities are more rudimentary. But as I found out, they seem to grow by leaps and bounds through a combination of summer workshops and internships in companies.

The Decisive Difference Between Them and Us

It’s strange somehow. The university entrance examination system has Japanese high school students studying at cram schools with no breaks at the same time that their Finnish peers are eating meals at home with their families and traveling around. Finnish students operate in an environment that does not expose them to lots of stress and anxiety. They are not exhausted by competition or forced to pursue something relentlessly over a number of years. The system of internships for university students is widespread in Finland. Its big advantage is that students can see what work is being done in real-life situations. Japanese art universities afford few such opportunities.

After being in Finland for a number of years I married a Finnish man. This contributed hugely to my understanding the difference in mentality between Finns and Japanese. 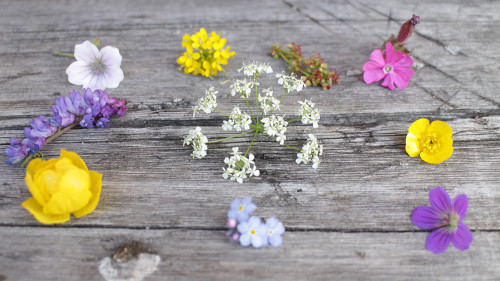 Starting in mid-June the wildflowers all burst into bloom at around the same time. To the Japanese way of thinking, it’s spring at last. To a Finn, it’s the arrival of summer.

Do You Really Have to Do That Now?

In the world of design what counts is not how many hours you need to work each day but how long it will take to finish your project. The project you are working on now is one thing, but you also have to think about getting your next project. If you do a bad job now, there won’t be a next project, so you have to do your best. That may mean working through the night. My Japanese friends who work in architecture are used to a crushing workload like this.

One time when I was skipping meals and working on a project till late every night in front of my computer, this is the conversation my husband and I had.
He said, “Do you really have to do that work today?”
I retorted, “If I don’t do it, nobody else is going to do it for me. If it doesn’t get done now, it’s going to be waiting for me. How many times do I have to tell you this until you understand?”
“It’s OK if it’s waiting for you. We’ve got enough money to live on for now,” is what he came back with.
“That’s not the point,” I said.
“Get with it. I don’t want to keep on living this way. Maybe it’s time to break up,” he said.

I could not believe what I was hearing. I was just trying to do my best. To me the things that get rewarded in life are effort and perseverance. So even if my husband thinks I am nuts for working on my projects till late at night, the way I look at it I will be praised for doing a good job. Ironically, my effort and perseverance put a damper on our home life and stressed my husband out in a big way.

Around the same time as that conversation with my husband, I ran into the same kind of resistance from a Finnish designer I was working with on sales promotion. In order to get a better result, I felt like if I didn’t put in extra effort she wouldn’t get moving. She felt like I was forcing her to do something she didn’t want to; I felt isolated and exhausted. A psychological chasm opened up between us. 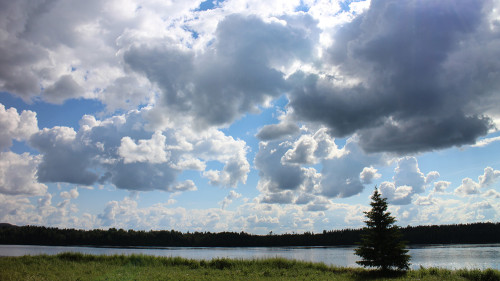 June 30: Typical Lapland summer clouds. After this date it’s summer. Temperatures can even go up over 30 degrees. Between June and August, people that work for companies take as much as a month off for their summer vacation by taking compensation time.

What have I learned from being here?
One thing is this. If a somewhat ambitious goal is set, the idea that it could be achieved through some extra effort doesn’t exist in Finland. The reason is this: If priorities were set that way it would pose a threat to people’s families and health. Therefore, the goals that are set have to be achievable without a lot of overtime work. If a project is late and that inconveniences somebody, the way people see it here that’s OK. Their own time off takes priority.

At school and at work, it you want to achieve a result, in Japan the common wisdom is that people will have to redouble their effort and somebody or something will have to suffer in order to achieve a really good outcome. Picking up stray balls in club sports is an example of this approach. Players start out doing unrewarding activities that require a lot of perseverance without grumbling and then, through continued effort, move up to pursue goals that exceed expectations. The same goes for economic activities. Japan was shaped by people’s mutual support of the virtue seen in hard work in and of itself.

So which approach to life, Finland’s or Japan’s, leads to greater happiness? I suspect that most Japanese today would think that the pursuit of limitless economic growth made possible by the spirit of “perseverance” and “hard work” destroyed many people’s lives. I have experienced this kind of sheer exhaustion twice, and I have experienced even worse, a feeling like I am cornered and there is no way out.

During World War II lots of people in Japan would not admit defeat was imminent even though it was clearly apparent. Today, many years after the war, faced with a declining economy and aging and shrinking population, politicians in Japan keep on talking about economic growth. It looks like they aren’t looking for a solution that faces the current reality and recognizes things can’t keep on going the way they were, don’t you think?

Nonetheless, I think it will be very hard for the Japanese to change so basic a part of their psychological outlook on life. The reason I say this is my own experience. I have lived in Finland for more than ten years now, and I myself haven’t been able to escape from this mentality. If somebody tells me to take time off, I worry about my work. I keep on working till late at night, and I can’t stand it if I haven’t double-checked my work. I get mad when I meet a Finn who hasn’t finished his work as promised. I remember the pride Japanese people take in work they have done right. Even though the Finnish outlook on life might lead to greater happiness, for a Japanese it remains unsettling.

From 2010 to 2012, according to an international ranking of happiness by country, Finland came in 7th and Japan 43rd. All the Scandinavian countries came in at the top of the rankings. Next time I will write about the politics here as it relates to happiness. 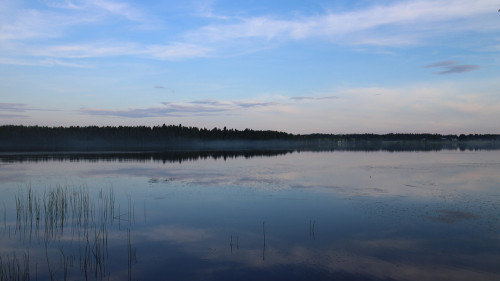 9:30 PM on July 19. It’s so quiet and still it’s hard to tell there was a downpour during the day. It’s been a month since the summer solstice, but the sky still looks as if it were only early afternoon. Sunset will not be until 11:45 PM. 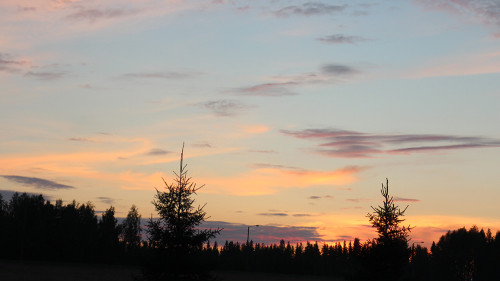 The sky just a little after the next day has begun, a little after midnight—12:12 AM on July 20. The sun is still below the horizon but it’s not dark. The sky looks like a typical sunset. Sunrise will be at 3:05 AM.

URATA Aika / Designer
Graduated from Kyoto City University of Arts. After working in several design companies in Japan, moved to Finland for study in 2001. After graduating in industrial design from University of Lapland, set up her own company, Aika Felt Works, in Rovaniemi. Using felt she makes items for daily use and interior decoration.
http://www.aikafeltworks.com 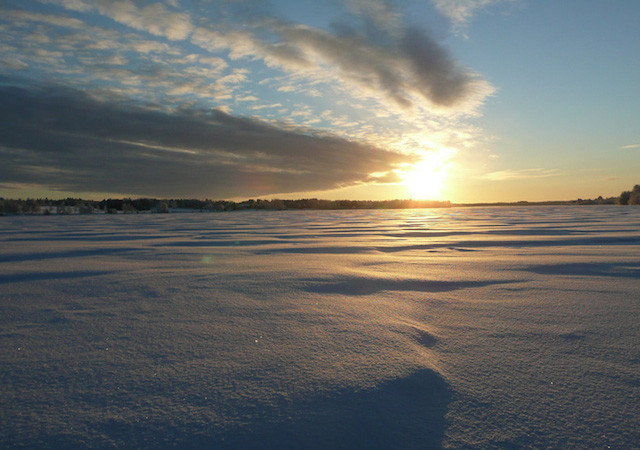 Mail from Rovaniemi, Vol.1
Thinking about the Happiness

Nature and People in Northern Europe, and the Society They Have Created I h 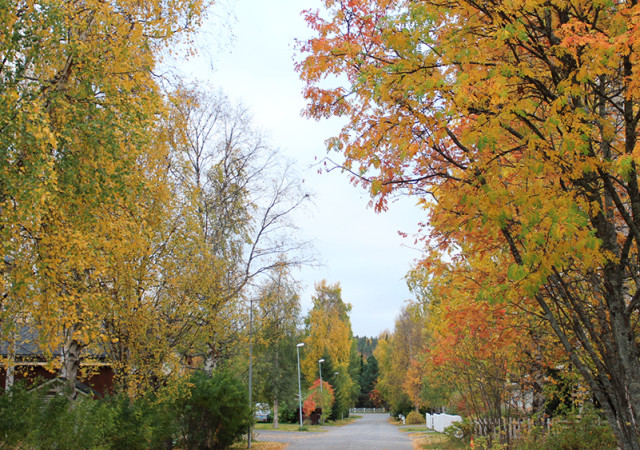 Mail from Rovaniemi, Vol.3
How the politics change the people’s life

Graduated from Kyoto City University of Arts. After working in several desi