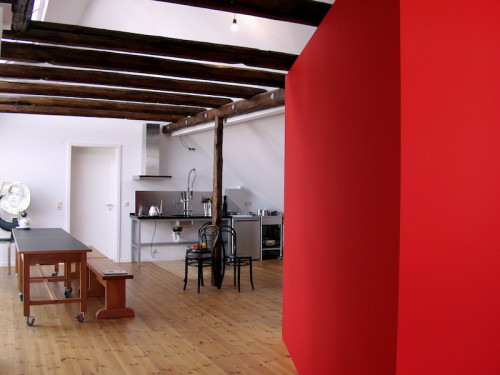 In the previous installment I discussed the interior design and objets d’art created by local Hannover artist Dieter Froehlich as part of my project “Kubus M33.” This time I will look at art that carries a strong influence from the world of literary great Johann Wolfgang von Goethe (1749-1832) and at German avant-garde design of the 1980s.

In my living-dining room I have got an ensemble consisting of a multi-purpose table on wheels and benches, all made of beech. The tabletop is black linoleum so it is really fun to keep clean. I also have two custom-made chairs (by Siegfried M. Syniuga) whose backs include photos of Russian composer Dmitri Shostakovich and Russian poet Vladimir Mayakovsky, as well a chandelier by Volker Albus. The chairs and chandelier are period pieces typical of German avant-garde design of the 1980s. 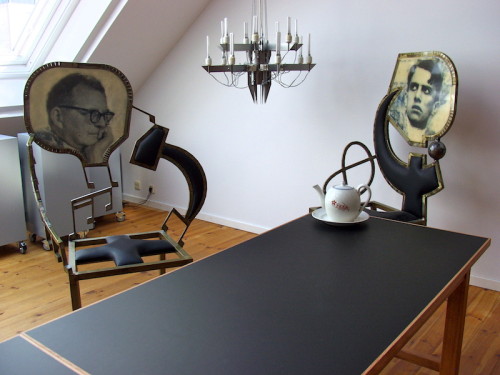 My kitchen is entirely open. The plumbing and the garbage can are in plain view. For dish storage I have got four units that are a variation on the four-piece set of cubes. Lacquer paint on the inside as well makes them completely sanitary. People that come to visit are surprised by the absence of a TV set and microwave.

The bedroom furniture is an original design by Froelich, all finished uniformly in “Stone Gray” (one of the colors in the German RAL standard). The photo here is focused on my bed, but off to the side you can see vintage wooden chairs from the early Modern period. The nightstand is not in the photo, but it is a cube painted the same color. The bottom of the bed consists of huge drawers. The piece of art on the wall is a line from Goethe’s Faust: “Und was verschwand, wird mir zu Wirklichkeiten (And all I lost is real).” 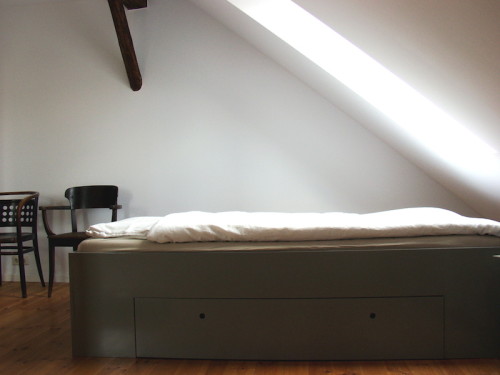 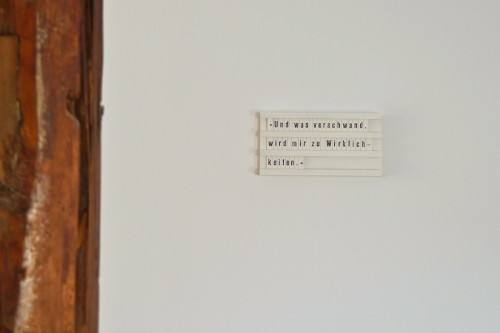 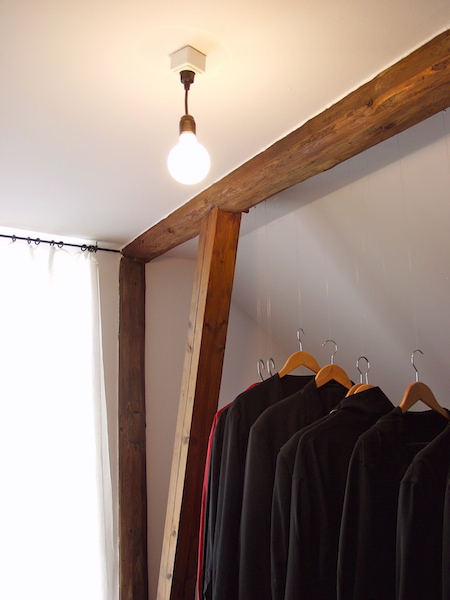 The ceiling lighting is simple and inexpensive equipment from a do-it-yourself store, light bulbs that screw into a socket that plugs straight into a receptacle in the ceiling. The open closet is also a very economical DIY design. Piano wire is attached to screws into the back of the beam, and hangers are hung from the wire. By adjusting the length of the wire I can rhythmically change how low the clothes hang. 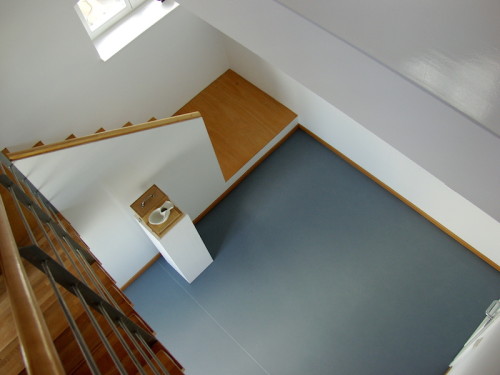 A Void that Mixes the 19th and 21st Centuries

The entrance is a two-story void containing an L-shaped stair. This space has the feeling of a small gallery. When I get home I am greeted by two objets d’art. Hanging on the wall is “Flower Vase Trio” by Froelich, which consists of three vases that cannot be used. Next to it is Library Step, by Konstantin Grcic, which unfortunately has been discontinued by its manufacturer. On the Step I have placed a late 19th century bound edition of Goethe’s Faust. Every day when I pass by I turn the page and read a few lines. 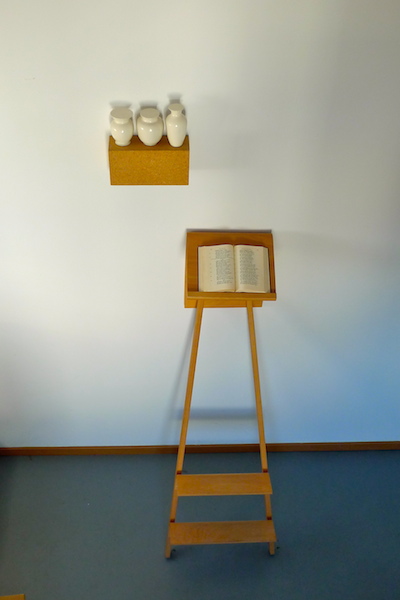 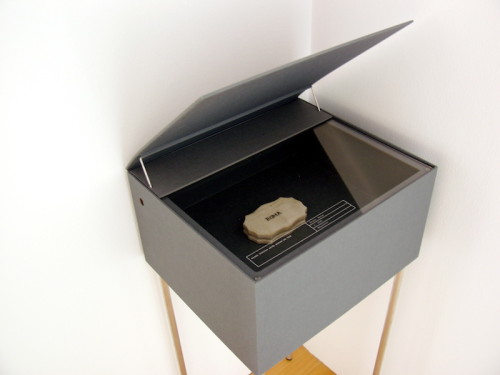 On the landing on the way up the stairs there is a gray showcase designed by Grcic for an exhibition in Goethe’s house in Rome. It contains an arrangement of pieces of marble that were a common 19th century souvenir. Another objet, a cane designed by Grcic, leans against the balustrade. The design of the cane is based on a map that traces the route of Goethe’s trip to Italy. It almost feels like he just returned from Italy with that cane in hand. 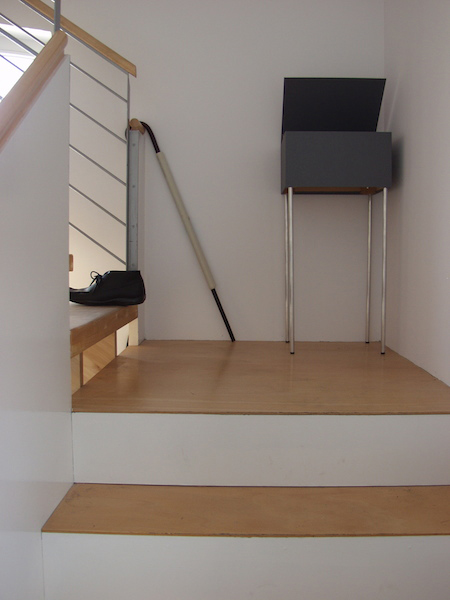 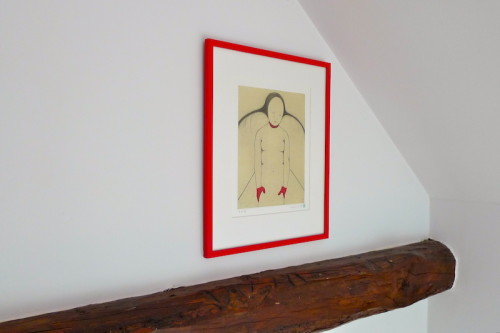 If you look up for a second, you enter into a dialog with the copperplate print “Sho” by Kumi Machida, who has opened up new expressive possibilities in Japanese painting (Nihonga). You get the feeling it is almost a photograph, but if you look closely you notice the slight sparkle of miniature Swarovski crystals that are adhered to the part of the image depicting the skirt. (Hiroko Wakai)

Hanae Komachi, Cultural Journalist and Photographer
From Hachiohe, Aomori Prefecture, Japan. Graduated from Waseda University, Literature Department 1. Has lived in Germany for 30 years. Long-standing focus on projects relating to cultural creation in the context of design. Contributor to design magazines such as AXIS. Publications include Herrenhäuser Gärten (about the gardens at the royal palace in Hannover) and Das Fest der Götter (Festival of the Gods), both in German, and a translation into German of the short story “Akai Isho” (Red Costumes) by Tetsuro Miura. Recipient of the iF Communication Design Award for the German-Japanese cultural exchange project SAKE8. Currently contributing a regular column on European hotel interior designs. 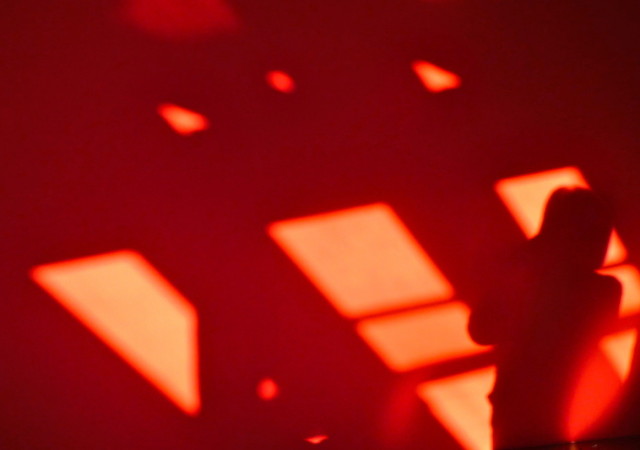