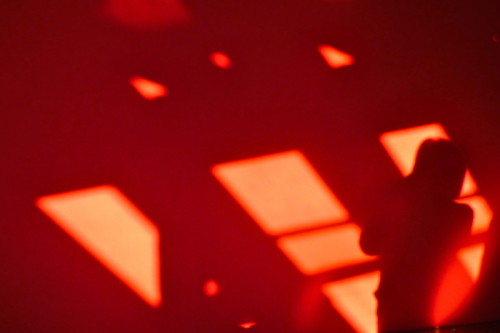 This photograph may look like a painting, but in reality it is the pattern created when the morning sun shines in through a skylight and lands on a large red three-dimensional object in my house. The structure around the skylight in my gabled roof creates a pattern of light and shadow on the surface of what is a red cube, and the pattern is different every morning depending on the nature of the light. Welcome to my column “Kubus M33” brought to you from Hannover, Germany.

「To Every Worker a Cube to Live In

It takes about 10 minutes to get from the center of Hannover to my residence and workplace by taking the Jasper Morrison tram in the direction of the exhibition fairgrounds. This year is the 10th anniversary of my Living Design Art Project “Kubus M33.” I took the attic of a house that was the residence of the owner of the adjacent small 19th century brick factory (which is still in operation) and entirely transformed the space.

さKubus M33 looks like a codename, so I am sure you are wondering what it refers to. Kubus means cube in German. M is the first letter of the last name of the Russian avant-garde artist Kazimir Malevich. The number 33 is a hidden reference to the revolutions per minute an LP record spins at. My project took inspiration from Malevich, who viewed the cube as a “geometric paradise” and thought that all workers should be given a cube to live in. The basic idea behind the residence was the fact a cube is equal in all directions no matter how you look at it. The project does not merely reflect a love for music and interest in Malevich’s ideas but is intended to pay homage subtly to all avant-garde artists of the 20th century.

A Red Cube that Punches Through the Roof

Local sculptor Dieter Froelich took my inchoate notions and ran with them to turn what would have been a simple renovation of the space into an original design extending all the way to the furniture. The red cube was the end result of an attempt to create a paradise for listening to and appreciating classical music every day. This was in response to a request from my husband. The red cube is 3 meters on each side and punches through the late 19th century roof as if to create a 20th century cube. 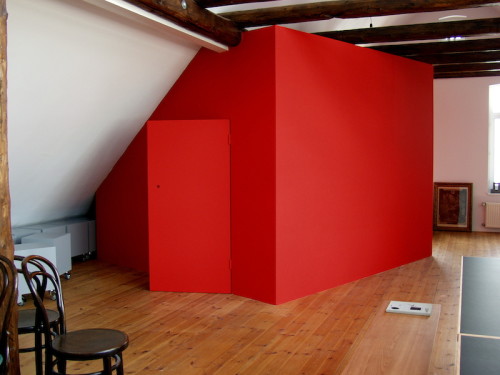 My husband enter the cube every evening after dinner. Inside the acoustics are designed to perfection. When he closes his eyes the finite world vanishes and he has the sense of listening to music in an infinite world, he tells me. Inside the cube he can listen to music at high volume, but on the outside all I perceive is what seems like low background music. The inside, where he has set up his vintage high-fi system, is lined with a sound-absorbent urethane sponge material.

Froelich also designed a miniature red cube. It is a daring objet d’art made out of a ceramic material that he fired himself. The cube also functions as a place to put rings. A mini-mini red cube ring that I call “Kubus D25”—my husband made it for me on the occasion of the 25th anniversary of my coming to Germany—is hidden inside the ceramic cube. The copper cube attached to the ring is hollow and conceals 25 mini-mini-mini diamonds. The only way to know there are diamonds inside is to shake the ring close to your ear and hear the sound the diamonds make while bouncing around inside. My husband tells me his concept was based on the craftsmanship behind the haori, a traditional Japanese men’s garment. 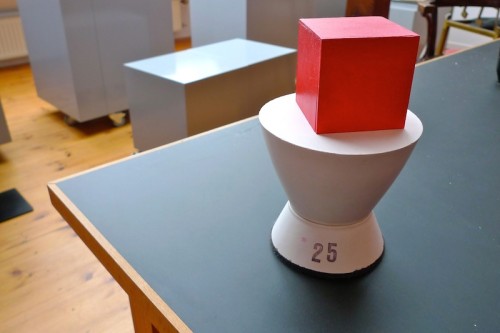 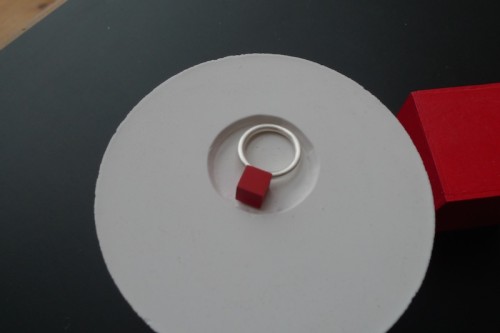 Gray Cubes with a Life of Their Own?

When we moved to this place my husband picked through his music collection carefully and got rid of half of it, but he still has 6,800 LPs and 3,000 CDs. To store them he has small cubes and large cubes that are “Window Gray” (one of the colors in the German RAL standard).

There are 34 small cubes (40 x 40 x 36 cm) to store the LPs and four large cubes that open up by unfolding to store the CDs. The cubes are made out of medium-density fiberboard and are unfinished on the inside. The artist finished the outside using lacquer paint. Wheels (with stops) are attached to the bottoms of the cubes so they are easy to move. This makes it possible to freely change the interior landscape at ay time. When the cubes are arranged in a seemingly chaotic fashion it is almost as if they have a life of their own and decided where to go themselves. The cubes are an ingenious way of storing the music within reach but out of sight.

n this installment I discussed Froelich’s design, in particular the objets d’art he creates. Next time I will look at art that carries a strong influence from the world of literary great Johann Wolfgang von Goethe (1749-1832) and at German avant-garde design of the 1980s. (Hiroko Wakai) 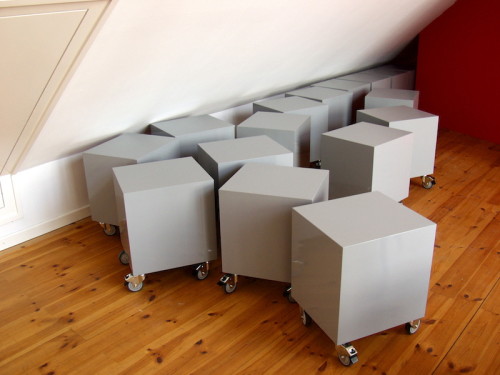 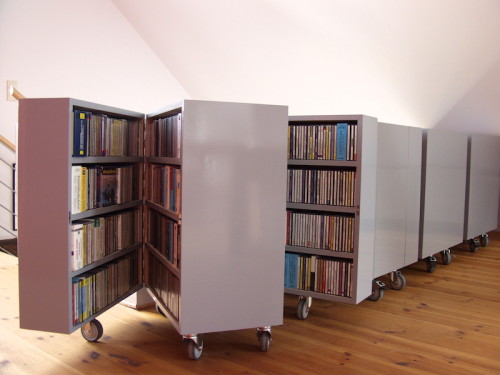 Hanae Komachi, Cultural Journalist and Photographer
From Hachiohe, Aomori Prefecture, Japan. Graduated from Waseda University, Literature Department 1. Has lived in Germany for 30 years. Long-standing focus on projects relating to cultural creation in the context of design. Contributor to design magazines such as AXIS. Publications include Herrenhäuser Gärten (about the gardens at the royal palace in Hannover) and Das Fest der Götter (Festival of the Gods), both in German, and a translation into German of the short story “Akai Isho” (Red Costumes) by Tetsuro Miura. Recipient of the iF Communication Design Award for the German-Japanese cultural exchange project SAKE8. Currently contributing a regular column on European hotel interior designs. http://www.cera.co.jp/column/hotel/ 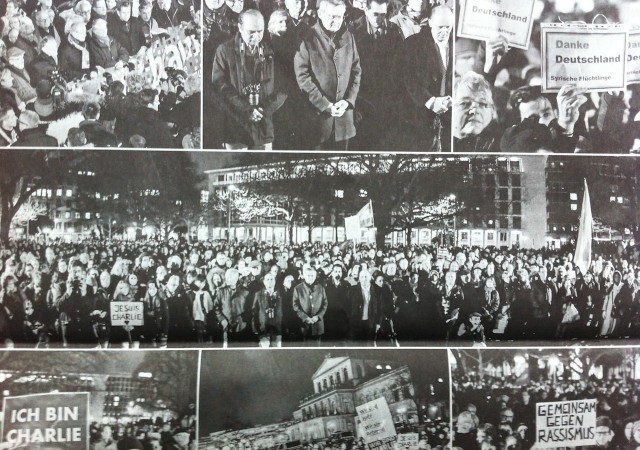 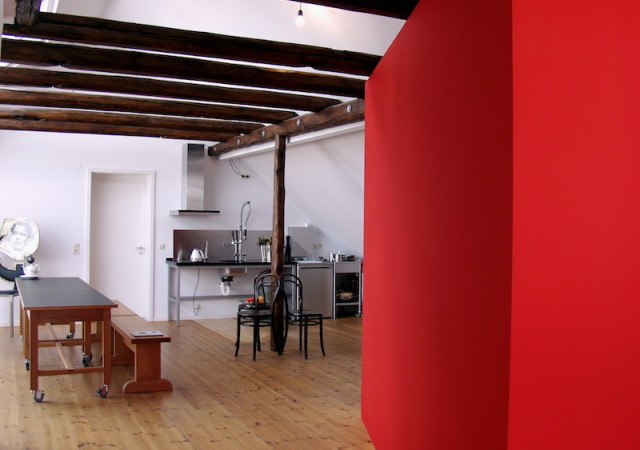