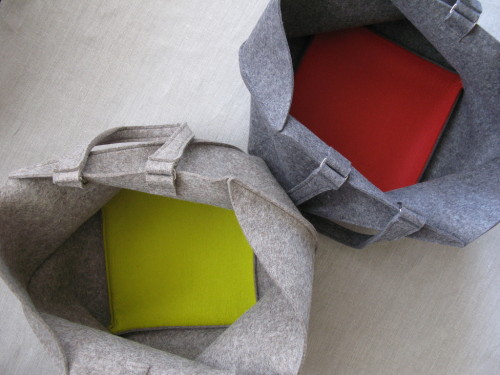 Cube-shaped bag provides lots of space for when you’re going out. Made of 3 mm thick felt. A Books and Modern Original. Unlike most bags that are one-tone only, this bag is available in 2 two-tone combinations: Natural Gray + Red, and Natural Brown + Green. Designed to fit the carrier’s hand and to avoid confusion. 25 mm wide, so a little thinner than the previous design.

In the fall of 2010 I attended HIRAMEKI, an exhibition intended to introduce Finnish design to a wider public, held at the OZONE Design Center in Shinjuku, Tokyo. I had a chance to talk not only with the producers of the exhibition, Ilkka Suppanen and Harri Koskinen, but also with some of the up-and-coming designers. Among them was Aika Urata, a graduate of the University of Lapland, a Japanese woman with her own design company in Finland.
When I asked her why she had gone to Finland to study, she told me she was really attracted by the refined forms, sense of materials, and attention to detail in the work by Finnish designers such as Kaj Franck. Also, she had heard stories of what it was like to study abroad from a friend, and she sensed a big opportunity in Finland’s extensive financial support for entrepreneurs and the government’s promotion of the design industry.

To understand the policies Northern European countries like Finland established to deal with social transformation, let me delve a little into the historical context.
In 1989 the Berlin Wall came down, and in 1991 the Soviet Union collapsed. During the 1990s, after the Cold War had ended, the European economy slumped. The situation was particularly bad in Finland. The previous economic model in most advanced countries was an industrial-based society. The transition to an information-based society was accomplished under government direction. As part of this shift, the country’s industrial policy emphasized promoting high value-added industries such as design. Well-established designers in the generation of Ilkka Suppanen and Harri Koskinen benefited enormously from these policies and flourished.
AIka Urata, who arrived after 2000, explains some of the ways designers like she can enjoy government support in the process of going independent and setting up their own businesses. Entrepreneurs can get “working grants,” which provide financial support with no obligation to repay. They can also get “project grants,” which are intended to support them in establishing a business plan. “Traveling grants” are also available to support travel expenses.

Felt Products Made in Lapland

Aika Urata established Aika Felt Works in Rovaniemi after she graduated from the University of Lapland in 2005. The products she makes out of felt not only exploit the esthetic qualities of the material, its warmth and beauty, but also the strength and flexibility of felt, which make the products highly functional as well. Above all else, what is important to Aika is the sheer beauty of the forms she creates.
“More than anything else, I want the things I make to reach people who really appreciate them and for the things I make to fulfill their intended function. One of the great things about felt is that it returns to nature. After an item is no longer in use, it will quietly disappear. Materials like that are ideal, I think,” Aika told me when I interviewed her.
The attitude of a lot of people involved in making things is: “I want to leave a legacy of my life. I want to create things that are a memorial to myself.” Being accustomed to hearing that way of thinking, Aika’s words came as a bit of a surprise to me at first. But after I overcame my momentary surprise, I was almost moved to the point of tears.
Those words—“it will quietly disappear”—are almost poetic in their insightfulness. I think they should not be forgotten by anyone involved in the process of creating things. (H. W.) 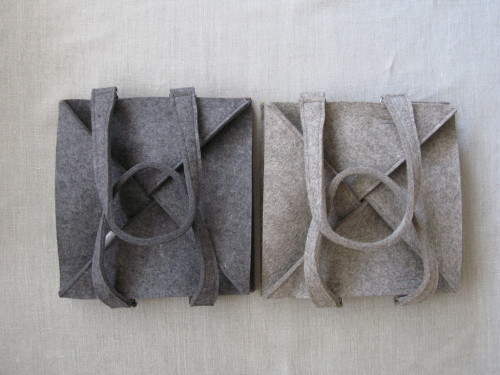 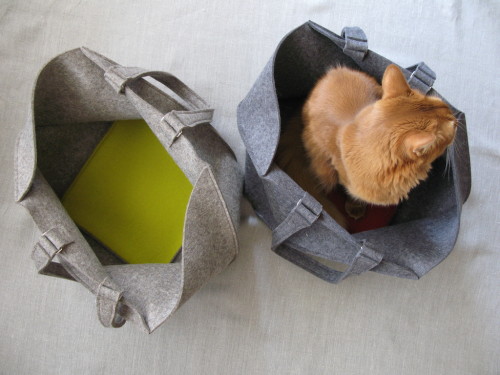