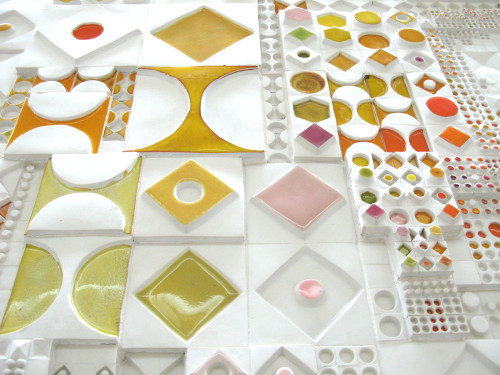 Detail of City in the Sun (1975). Ceramic wall relief in the lobby of Helsinki City Hall. 4790mm W x 2960 mm H. Even today, many citizens come to the building just to see the wall relief.

The headquarters of Arabia of Finland is located six kilometers northeast of the center of Helsinki. This location is already somewhat removed from the din of the city, and the art department on the top floor is quieter yet. The view out the window is dominated by the blue sky and the sea, a perfect environment for creative activity. Moreover, Arabia’s production line is on the same site, so the company’s artists have ready access to all the materials they might need.

This is the spot where Rut Bryk’s colorful tiles came into the world, and some 200 types of glazes were developed in the company’s experimental lab. How a color will appear after firing is something that only memory and experience can tell. It is said that Bryk knew how to use all the glazes.

Rut’s daughter Maaria owns a notebook her mother kept in which she recorded assiduously the numbers or codes of the colors she used in all the pieces she created over the span of several decades.

During her years at Arabia, Bryk’s working method consisted of covering the floor of the 9th floor studio with tiles with the help of her assistant and then getting up on a tall platform to look down at them from above. Over and over again, the two of them would rearrange the tiles piece by piece, then go up and take another look from the platform. 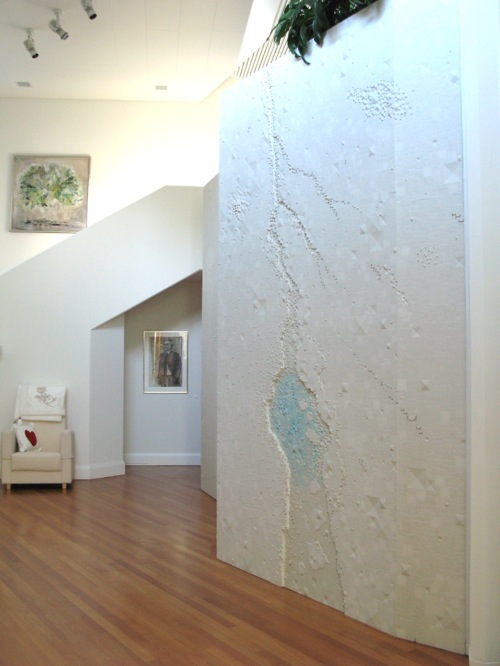 Ice Flow (1987-91). Ceramic wall relief in the Official Residence of the President of Finland. This work represents the nature and miracles that people may or may not encounter during their life on earth. 3700mm H. Total area 30 m2.

In the 1980s Bryk’s expression matured to the point where the distinction between abstraction and realism had faded away. The works from this period synthesize often contrasting images that bridge contrasts—light and dark, static and moving, warm and cold—in a way that gives them a poetic dynamism.

Ice Flow (1987-91), a ceramic wall relief that covers a large expanse of wall in the Official Residence of the President of Finland, depicts the nature and miracles that people may or may not encounter during their life on earth. It awes the people who look at it, leading both to surprise and nostalgia.

Bryk created Ice Flow just before the death of her husband Tapio Wirkkala. “Making that piece gave my mother the strength to keep on living,” Maaria thinks. “If that is so, it’s the greatest tribute to my father.”

In the 1980s Western Europe was coming close to becoming the “single Europe” Europeans had dreamed off for 100 years. In 1989 the Cold War came to a close. In 1991 the Soviet Union collapsed. In 1993 the dream of an EU became reality. While the rest of Europe was mired in recession in the 1990s, Finland succeeded in making major economic and social reforms. The world market began to appreciate products designed in Finland not only for their commercial value but also for the value embodied in their intellectual property.

Architectural writer Juhani Pallasmaa (*4) has written about Bryk’s generation of Finnish artists and designers: “During the years leading up to World War II and right after the war, artistic production and design was not so much a ‘job’ as ‘an attitude toward living.’”

Although not as seriously affected by the war as Western Europe, Bryk’s life bears its mark. She was born into the intelligentsia at a time when social class distinctions still mattered considerably. She experienced her parent’s marriage before the war, was a student during the war, and experienced Finland’s defeat at the end of the war.

After the war, when she started her life as an artist, one is tempted to ask whether she gritted her teeth. Did she hide her feelings as befit a woman at the time? In a changing Europe, how did she view the sudden changes in Finland? Even after several days spent talking with Maaria, the answers to those questions remain unanswered. What I do know is that Bryk was an exceptionally gifted artist, with a superb partner who made it possible for her to spread her creative wings wide, and she left behind a significant legacy. 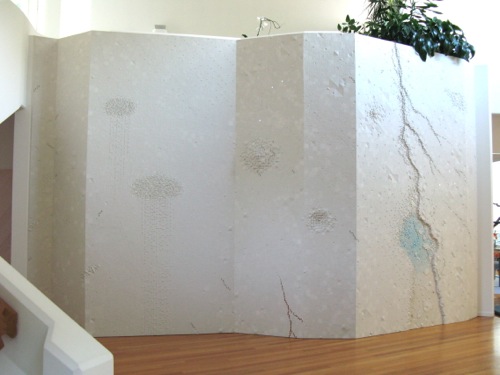 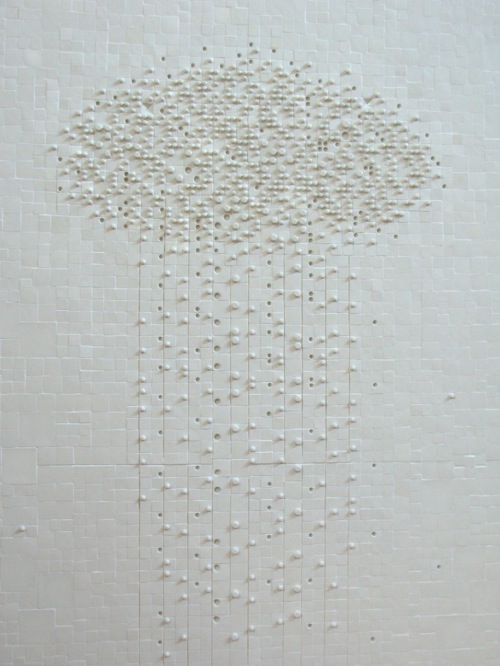 Many people have the capacity to create beautiful images in their heads. But it is much more difficult to reify those images. The key to doing so lies not in genius. The key is to take the simplest of resources and persevere, I think.

When it comes to how Bryk work, the essentials were: How many pieces, and pieces of what sizes, are needed? What patterns are to be created? What is the extent of the variation in color needed? What about variations in texture? What glazes will work together best? Are 100 patterns needed, or 200? Bryk’s work centered not just on preparing the materials. Tending to mundane details may seems the opposite of creative, but the humdrum tasks of actually checking each individual piece and figuring out how the pieces go together was nothing if not essential.

But more than that, creating a harmonious composition means using your body, arms and hands in a roundabout process of trial and error. Each attempt requires unflagging effort and a dispassionate eye. In the end the reward is the realization of the image the artist created in her mind.

Rut Bryk’s late works have an aura about them that arrests those who view them. The thousands of tightly interlocking ceramic pieces that come together to make up a carefully planned composition concentrate the viewer. It is similar to the experience of a concertgoer who has arrived late and is swept up by the music the minute the door to the concert hall opens. There is an overwhelming feeling that comes with the experience of seeing one of Bryk’s later works where her expressiveness is at its most powerful. 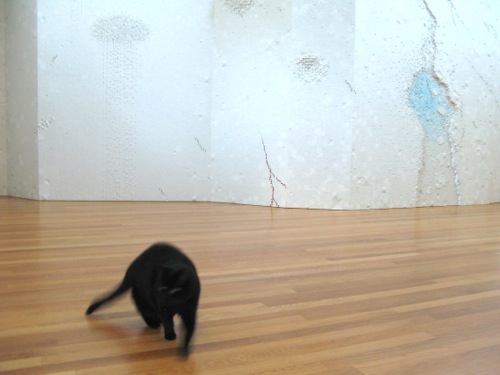 (*4) Juhani Pallasmaa (1936-). Architect. Professor at Helsinki University of Technology (now Aalto University). Visiting Professor at Washington University in St. Louis (USA). Professor at the University of Illinois (USA). Numerous designs for public buildings in Finland, Europe and the US since the 1970s. Architectural and art critic and author of numerous publications. The text quoted in this article is taken from the catalog of the 1986 Rut Bryk exhibition at the Amos Anderson Art Museum, Finland’s largest private museum of art.

For reference: URL for Wirkkala-Bryk Foundation