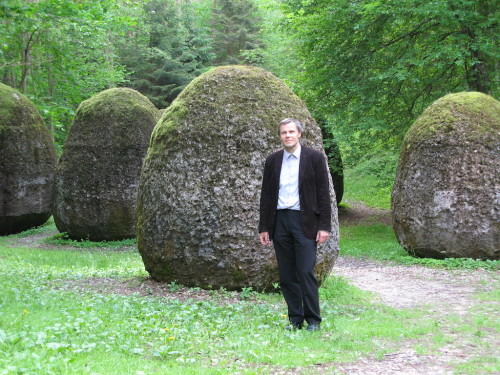 How do you image about Lithuania in 1980’s? Berlin Wall was still there in Germany, Baltic states were included in Soviet union, no freedom of expression, dark and so on…, those were my images.
But in 2013, I visited the open air museum, Europos Parkas in Vilnius and met Gintaras Karosas, I realized all my images were wrong.

The very first modern art open air museum Europos Parkas is there, in the quiet forest 20 km north from the center of Vilnius. Its total area is 55 hectares and more than 120 sculptures from 30 countries in the world are there, from 1991 to present. The story began in 1987 with just one college student Gintaras Karosas.
He said “I’m creating Europos Parkas as a place of relaxing and getting back our own peace of mind in the difficult modern life”. 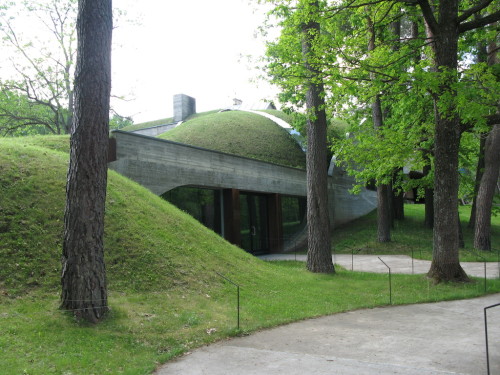 Educational center in the museum designed by Gintaras Karosas

Just before the breakdown of Soviet Union

──I suppose it was terrible confused situation before re-independent from Soviet Union especially from 1987 to 1991. Actually, how was it in Lithuania?

To regain independence after Soviet occupation, it was a dream of Lithuanian people. At that time, it was an issue to speak about it not only at home. It influenced the project of making museum very positively. It was a time when creative energy was hanging in the air.

──in 1987, how could you get the ground for this museum in spite of you were just a student?

In Soviet time all the ground belonged to the State, there was no other ground properties. At first I could only come to ask local authorities for permission to clean neglected forest and to create a park.
At first it was my manual labor with axe, chainsaw and vision in mind. I myself was working alone for a long time. My parents were the very first sponsors. 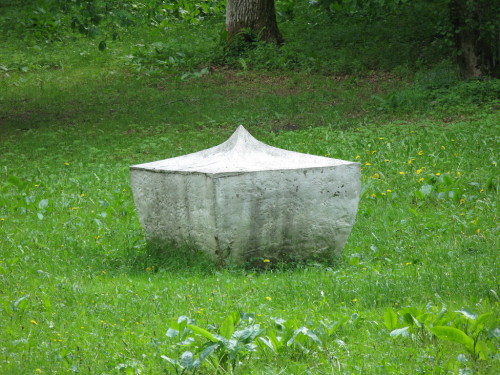 Opened and the management

──In 1990, Lithuania got re-independence, and the open air museum opened in 1995?

The very first sculpture was built in 1991. The first international sculpture symposium was held in 1993. In 1995, Europos Parkas became well-known and visitors started to come to see the exhibition. Now we have 25000 – 65000
visitors through 1 year.

──
At present, the ground is owned by whom? 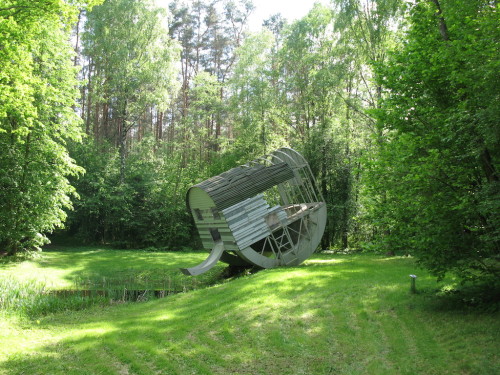 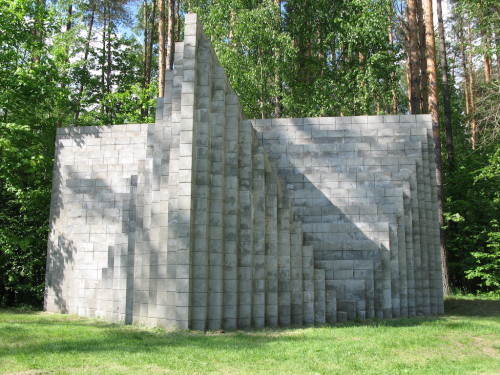 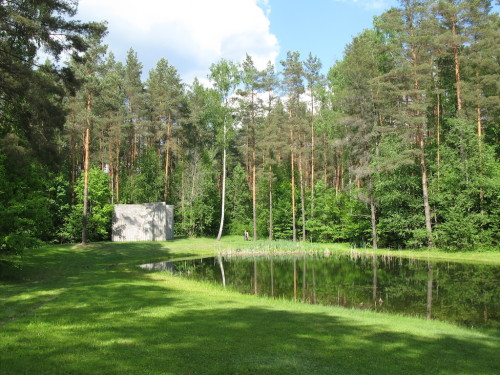 In 1993 when the foundation of Europos Parkas NPO was founded the
first sponsors were Fujifilm Lithuania, Lithuanian mobile telephone company Comliet. Also foreign Embassies supported the participation of artists from their countries, sometimes we could get support from private companies that were related with artist country. For example implementation of sculpture of Japanese artist Yoshitada
Ihara has been supported by Toyota Lithuania.

We do not have a main sponsor. Visitors are the main supporters of the activity. Incomes from the tickets and services go for
maintenance of the museum. The beginning was much easier: low environment maintenance, salary and tax costs depending on the number of people employed, etc. Now the burden of landscape maintenance, open-air art object restoration, salaries and taxes of several tens of employees, without which the activity of the museum is unimaginable, rests heavy on us.
Every year we apply for State Cultural Fund’s support participating in various cultural programs. The state support is rather symbolic. 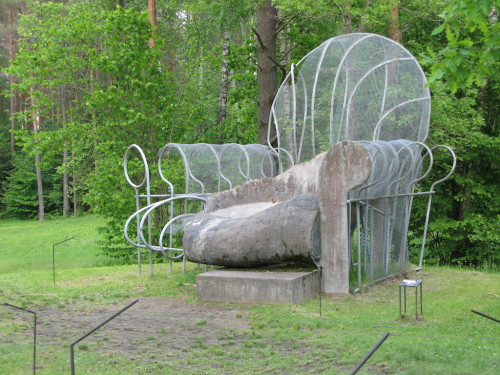 The first international symposium in Lithuania

──You hold the international symposium in 1993.

Yes, we wrote to artists and artists’ associations from various countries inviting to send their ideas and projects to participate in the international sculpture symposium. The Symposium was attended by 14 artists from Greece, the USA, Hungary, Finland, Armenia and Lithuania, who created sculptures that later became the
first exhibits of the Open-Air Museum.

Sometimes it was really interesting moments when communicating with international artists. For example we would invite artists to come to Lithuania, but some counties was only building the diplomatic relations at that time.
The artist from Peru, I think, was one of
the first Peruvian to come to Lithuania. It was very interesting and fruitful cooperation with Japanese artists. The artists, their art works and performances in Europos Parkas introduced the subtle world of Japanese culture to Lithuania.

──You researched the several open air museum in the world. How was in Japan?

The impression was really great. I visited Hakone in spring of 1995, during the rain season. I have very fond memories of Japan and visiting impressive Hakone open-air museum. I was welcomed by Hakone Open-Air Museum direction very warmly. 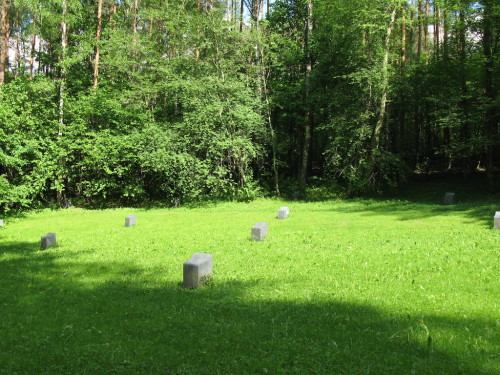 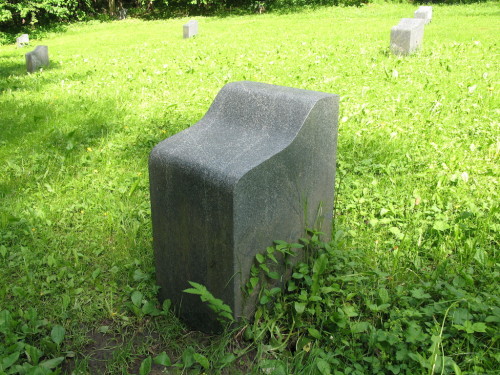 The forest of reflecting the evolutional moment

How do you plan and hope for progress of the museum?

The landscape of Europos Parkas has been constantly transforming, shaping and developing, thus creating a new quality over and over again. New sculptures are build every year and some artworks travel
to more suitable place until they really grow into surrounding.

When
Lithuania regained independence, it was possible to realize innovative ideas. With the fall of “iron curtain”, and the opportunities to communicate with the foreign artists opened.
Anyway, Europos Parkas is reflecting different evolution moments in Lithuanian sculpture of late 20th century and early 21st century. Some projects here were the first in Lithuania: the first international sculpture symposium, the first landscape sculpture. We introduced first in Lithuania site-specific works, that were created in Europos Parkas.
（W.H.） 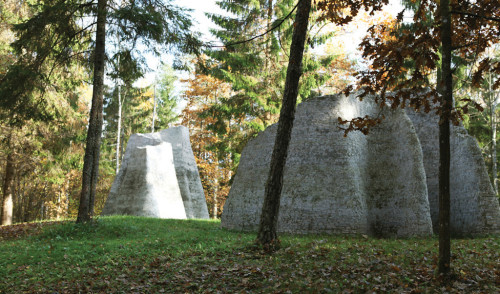 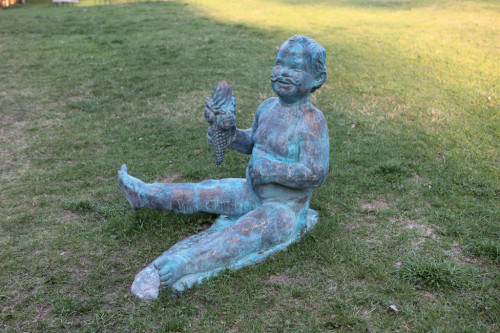 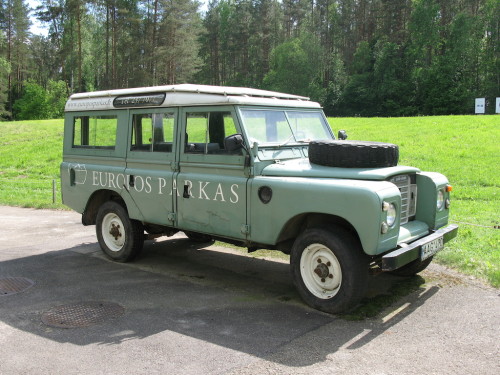 The “signboard” was stopped at the driveway in front of reception. 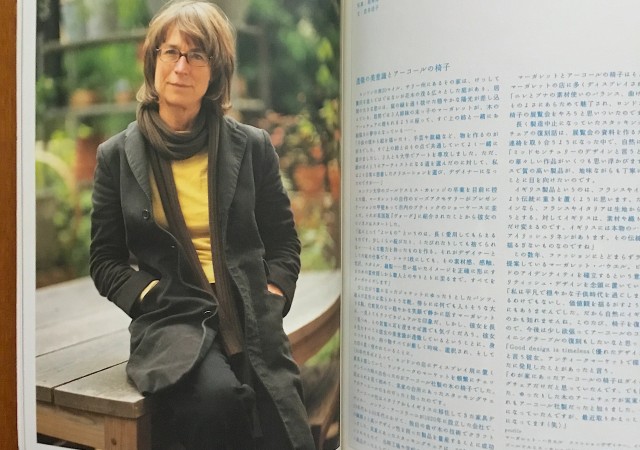 ☁ Although not luxuriously put together, a garden with trees and flowers gr